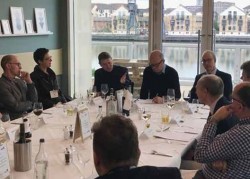 The Structural Timber Association (STA) recently hosted a roundtable discussion, gathering industry experts together to examine the many challenges ahead of reducing the UK’s carbon emissions and creating a safer built environment.

Delivering quality has always been ‘up front and centre’ for the construction industry. The emphasis is on producing buildings that are well built, using appropriate materials and which are fit-for-purpose. The requirement to reduce net carbon emissions to zero within 30 years is also having a huge impact on the construction sector with the pressure to innovate in better products, better techniques and, ultimately a better society.

It was these central themes under consideration during the roundtable discussion event hosted by the STA. Chaired by Thomas Lane, Building Magazine’s Group Technical Editor, the discussion kicked off around the subject of carbon emissions and what people thought of as net zero and what the challenges are in delivering it?

The Road to Zero Carbon

Kevin Riley, STA Board member and Sales Director, LVL, Stora Enso, argued that there ought to be some sort of clear definition on offer. “There are so many numbers being bandied around on how we get to this concept but until people understand what it actually means in practice, and have evidence of how it will actually work, it's a tough call.”
Lynne Sullivan from sustainableBYdesign, pointed out that talking about net zero encompassed a range of activities and defining the emissions is a massive challenge. “Apart from sorting the offshoring of emissions we need to decarbonise all our processes. That is a lot of renewable energy to get in place that all our factories would require. So, material extraction, material processing, product manufacture, and then the end-of-life side of things need to be considered. Every aspect of materials used in the built environment ought to be counted and zeroed in terms of greenhouse gas emissions. And we have got a way to go on that front.”

Andrew Carpenter, Chief Executive of the STA, gave the example of the French government demanding that within a very short timeframe all new public buildings will have to have a minimum of 50% timber with embodied carbon a key factor. “Obviously, we would suggest that the UK government might want to think along similar lines. Some major contractors are already working with embodied carbon calculators, there is also a disparity between what the industry was proactively trying to achieve and what government had set out.”

Kevin Riley highlighted what he called a ‘disconnect’ between the government’s green ambitions and the ability to deliver on the UK’s housing demand, with the limitations it was imposing on developers being able to use timber in new buildings. “If you are restricted from using timber in certain applications, then you are in danger of diverting from a very easy way to deliver on both the carbon agenda and housing crisis. If they put restrictions in place, those agenda targets are undeliverable.”

Has the client side upped the ante in terms of demanding better and more environmentally friendly materials and are clients seeking net zero commitment from the sector? Christiane Lellig, formerly of Wood for Good, said: “Apart from wanting to deliver homes that are aiming towards net zero and are also cost effective to run for their residents, the social housing sector in Wales wants to get into forestry as a means of offsetting and therefore becoming net zero as an organisation.”

Mark Stevenson, STA Chairman and Managing Director at Kingspan Timber Solutions, said he had been seeing a mixed picture, and it all depended on customer requirements. “The people that are building their own houses to live in, are much more concerned about energy efficiency. But many others are more concerned about how low their build costs are going to be. If you turn to the developers, as customers they are likely to be buying building regulation compliant units.”

And while politicians might be expecting the industry to come up with the solutions on how net zero carbon is achieved, there will inevitably be a cost, as Geoff Arnold, Managing Director of Pinewood Structures Ltd explained. “If you want to get to carbon zero, you have got to start adding technology to houses, built into the fabric. But you still need heating and hot water and bringing technology into it will add to the cost. A private sector developer will not be able to afford that because they need to sell houses at a certain market price.”

While there is potential for regulation, some fear it could lead to unseen consequences. Andrew Orriss of the STA wondered if there would be an increased risk of slotting embodied carbon into Part L of the Building Regulations that would create a habit of 'plant a tree'. “Part L has been a compromised document for as long as I can remember. It used to be called a trade-off, in that if you did ‘this’ you would not need to do ‘that’. If you introduced embodied carbon into an argument like that, you could shower the entire nation with new trees and people feeling good about their zero- carbon policy.”

Alex Goodfellow, Group Managing Director/Strategic Development at Stewart Milne and STA Board member said he did not think changes to regulations were anything to be particularly afraid of. “If we are really serious about this, the government needs to change the regulations, make the standards better and then the housebuilders will react as long as the regulation is sensible, logical and adequate time is given to comply. Government needs to be brave, sensible and use research, evidence and technical facts to create really good standards going forward. The industry may well complain about it for a short period but will get right behind it relatively quickly and innovation will prevail.”

The discussion then turned to the government’s ban on combustible materials being used on buildings taller than 11m and what impact this would have on the structural timber industry.

Kingspan’s Mark Stevenson believed the government was trying to solve the problem by addressing only one element, namely, it was trying to limit how the industry built homes thereby taking a ‘blunt club to performance.’ “There are three parts to what we need to achieve. In the event of a fire there is the integrity of the building, building safety, you have also got to deal with evacuation and how to extinguish it. You have got to look at all these aspects to come up with a solution that provides the outcome we were all after – which is safer buildings. Addressing one aspect will never do it.”

Andrew Orriss pointed to standards that apply in Scotland. “Last October, Scotland introduced an 11m height restriction but retained the use of combustible materials up to 18m providing there is sufficient evidence to demonstrate that building is safe. You can achieve that through various testing regimes and using things like masonry facades as a non-combustible solution. The Scottish standards demonstrate what I would say is a very good common sense approach.”

Francesca Berriman, Chief Executive of the Chartered Institute of Architectural Technologies chipped in on the issue of insurance. “It is a critically important point. Documents are being issued, which professionals are being expected to sign, insurers will not support, and the government has been completely reactive in its response. What is happened north of the border has been absolutely contrary in comparison and Westminster should be following the lead of Scotland.”

The question of on-site quality control was raised, not least in the area of cavity barriers and ensuring these were properly installed. But this goes further than installation, according to David Fleming, Technical Director of Walker Timber. “There’s the issue of supervision and insurance. It can come down to the site management team, in conjunction with the principal contractor, to sign that off. What is common practice now is to take photographic evidence for the benefit of the main contractor.”

The consultation around using combustible materials on tall buildings was a political gesture, Mark Stevenson added. “It will only ever be short term because you will always come back to the engineering and the science. And when we have done all the engineering and the science, which underpins the STA Assure programme, it will give us the optimism that timber offers the best solution. Not only that, but it offers one of the best answers for dealing with climate change.”

Fire safety in use effects all forms of construction. All buildings must be designed to comply with the functional protocols of the Building Regulations for fire safety requirements, as a minimum standard. The STA has invested in an industry leading fire in use research project to test and prove commonly used timber frame wall, floor and roof make-ups used in the UK marketplace. The output of this research, a pattern book of EN tested systems, is believed to be the first of its kind in the UK timber frame sector.

In addition, it has been identified by the STA that the installation of fire stops and cavity barriers are of equal importance when it comes to building safety – an issue which prevails regardless of the building methodology. The STA have responded by developing a new guidance document on cavity barriers to complement the existing information.

This research now forms part of the STA’s best practice guidance and is free to download from: www.structuraltimber.co.uk/links/research-documents

For more information on the STA and its member visit: www.structuraltimber.co.uk

Welcome to the Offsite Hub Roundtables where we discuss the latest trends and advances in offsite construction technology.

Welcome to the Offsite Hub Blog page where you will find exclusive industry content from the pioneers of offsite construction.

The Offsite Hub receives over 5,000 unique visitors per month, complemented by 42,300 newsletter subscribers, making the below digital opportunities an attractive proposition for marketers planning future activity:

Our offsite portfolio includes an abundance of profile-raising opportunities and this is just one way you can get involved!